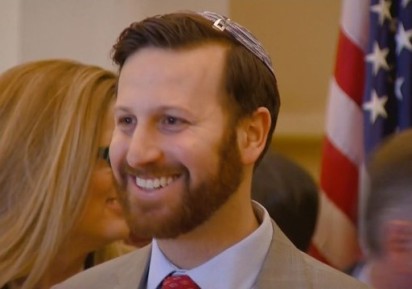 Rabbi Immerman joined Congregation Mishkan Israel in 2018, after serving as the Associate Rabbi at Temple Emanuel in Denver, CO. Rabbi Immerman grew up in Shaker Heights, OH where his family belonged to The Temple Tifereth Israel. He spent many summers at Goldman Union Camp Institute and worked as the program associate in the Youth Division of the Union for Reform Judaism in New York City prior to attending rabbinical school.

Rabbi Immerman received his bachelor’s degree in Computer Science from the University of Rochester in 2004, where he was also captain of the swim team. He attended Hebrew Union College – Jewish Institute of Religion (HUC-JIR) from 2007 – 2012 where he received his masters in Hebrew literature and rabbinical ordination at HUC-JIR’s New York City campus. While at HUC-JIR, Rabbi Immerman was a Shusterman Rabbinic Fellow, a joint collaboration between HUC-JIR and the Jewish Theological Seminary intended to foster innovation and vision in congregational rabbis.

In Denver, Rabbi Immerman served on the board of the Jewish Community Center and was active in Together Colorado’s Interfaith Clergy Network. He also served on Hazon’s Denver Advisory board. Rabbi Immerman completed the Rabbi Balfour Brickner Rabbinic Fellowship program in 2014 through the Religious Action Center to further his social justice advocacy work.

Rabbi Immerman brings a passion for the outdoors and social justice and strives to help people create more meaning in their lives through Jewish tradition and values. He resides in Hamden with his wife Jenny and children Maggie and Aiden.